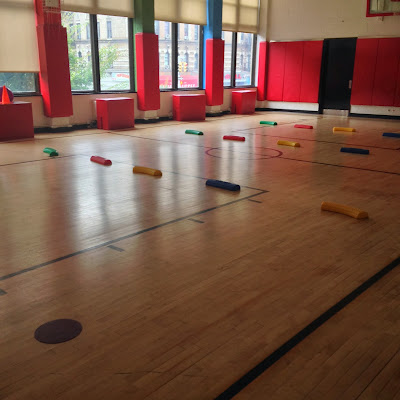 Last week I had some exciting Miss Maria moments with my early childhood classes. Recently we split my 3.5-4 year old ballet class into smaller groups in order create a more personalized atmosphere for the children. One of those groups is made up only of boys who would put the Energizer Bunny to shame.

Immediately, I knew that I would have to switch up my usual creative ballet lesson plan for this group to keep them moving and engaged, without running [and screaming] a muck. Yes, they often scream when they run. Just because.
I pulled out all the stops: their favorite movement sing a long songs, freeze dance [twice, with 2 different objectives], racing chasses & skips. For our Big Finale/Grande Allegro, I wanted them to do big leaps over the hurdles (pictured above).  The idea is for them to leap from one end of the gym to the other and stay in their lane, but when I have done this in the past those instructions usually go in one ear and out the other. I tell them to run and leap, and they do just that, over EVERY hurdle in whatever order - not because they don't understand - because they choose not to. [I should also say that I offer plenty of time and space for them to create their own paths and this is by no means an exercise in stifling creativity... ]

So I color coded the paths. There was a green, red, yellow, blue and rainbow lane that matched the color of each child's starting spot. When I gave the signal, their race of big leaps over the hurdles (because leaping is so much more fun when it's a race!) happened seamlessly. Success!

It was also the first time I saw so much focus out of most of these boys, all of whom are incredibly dynamic, not to mention energetic movers. They were determined to stay IN their lane, and make the biggest leaps and be the fastest. I'd say that's pretty good for four years old.

Is that an iPhone pic? Great shot!