assault/we're not having the WHOLE conversation 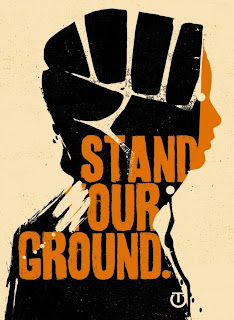 I am beyond perturbed, pissed off, peeved. I have been thinking that the one silver lining that has arisen around the dark cloud of all this Trayvon Martin-business is the national conversation we are having about race. Journalists and public academics and regular people who are fierce in the blogosphere are catalyzing critical conversations about race that are long overdue. It's the center piece of debate at backyard barbecues, casual dates, and happy hours. And lo and behold, in this firestorm of conversation I think people are learning something. (hint: "Post-racial America" is a myth.)

But I am beyond perturbed, pissed off and peeved because too many of these conversations, in which the specifics of the Trayvon Martin case have become the study for macro level theoretical discussions about the plight of black people in America, seem to forget how race is conflated with gender and class. Reading articles like this is an assault on my mind and spirit. It is salt in the wound after the empathetic physical assault that I feel in solidarity with every black and brown boy who gets gunned down for looking suspicious.

And it's not just me feeling this empathetic physical assault. It's you too. It's you who has already blogged about this, marched in the street, hollered, wrote the longest facebook status message ever, and shares article after article of commentary on the matter. You feel empathy. Or you want to. Or are hyper aware that you can not embody his experience. It is this kind of visceral E.T.-ness that has us screaming from every perch. Some how, some way, what happened to this boy hits home for us. It gets us in our gut. And yet, we're still not having the whole conversation.

Although, I am trying.

A friend shared that after hearing about Zimmerman's acquittal she went for a walk in her neighborhood to clear her mind and process what this all means for black men/black people. And all along her walk she was sexually harassed by black men. It's the dead of summer, the dead of "holla" season. And for every (black) man who is rightfully pissed at this assault on black manhood, another (black) man, or maybe the same, is assaulting (black) womanhood. And too many people are blind to the congruence. They do not see how raising their fist, power to the people, for only the assault on manhood while being complicit in an assault on womanhood, weakens their punch to the sky.

This assault on black bodies is layered and incessant. Silver lining: Trayvon thrust it in our faces, but now we have to deal with it - wholly. With the outrage-turned-action going on, folks are resurrecting the Civil Rights Movement, but they forget the blatant sexism that riddled that era and I for one AM NOT looking for a repeat.

I am thankful for commentary from Jamila Aisha Brown who argues, "I contend that if Trayvon Martin were a young black woman, we would not even know her name." I am thankful for those who are delving into the case of Marissa Alexander. But it is not enough.

So in the practice of taking action, I am making a call. Please share links in the comments section of books, articles, videos, infographics, sound recordings, feminism 101 syllabi and other resources that delve into INTERSECTIONALITY.

Then share these resources widely. And talk about it at your backyard barbecue, date tonight and happy hour tomorrow.

I'm urging you. Have whole conversations.
Posted by Sydnie Mosley at 4:29 PM

Resource on The Root: 15 Black Feminist Books Everyone Should Read