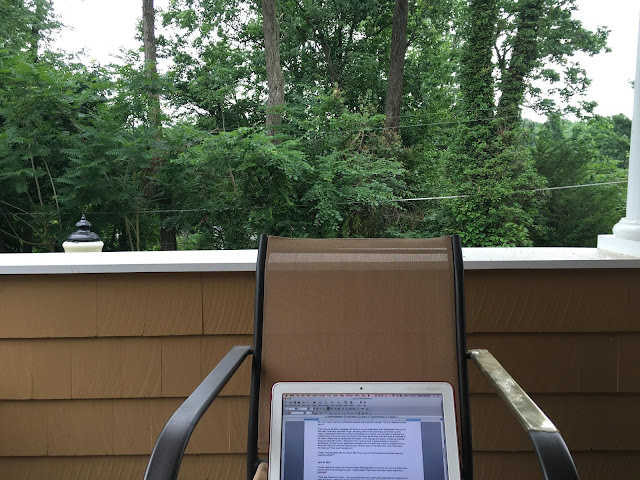 Today/July 4, 2016.
It’s taken me 15 months to get this post out, and today of all the days – the 4th of July – is when I finally feel free enough to finish this writing. Today, when the United States of America celebrates its independence with a day off, too much food and drink, and sparkling lights exploding overhead. On this day, I find myself lounging on my parents’ new porch, gazing at the trees, and inhaling more fresh air in the past 24 hours than I have since who-can-remember-when.

We moved here three weeks ago. Packed up 28 years of life on Woodbrook Avenue, stuffed it in a Budget moving truck, and dropped it off at a new house, only 10 minutes from the old one. We’ve always known this neighborhood and this street, North Avenue, but it’s still new in so many ways. That day was a historic one. The last of the Mosley’s moved away from Woodbrook Avenue where our family has lived for 66 years. Yes, you read that right.

When we arrived to the new house, Grammy greeted us with moving day-vittles and a pound cake. Damn, that cake was good. Maybe the best one she ever baked? Will she bring one when she comes by later?

Daddy put four whole seasoned chickens on the grill. He’s lining up sausages and hot dogs to go on next. I’m wondering, maybe we should make some lemonade for later?

April 25, 2016.
Exactly one year ago today, in the waning evening April sun, I picked up the phone and called my mother.

"Mommy, why is our neighborhood on fire?"

We were on Facetime on a Monday evening. She and I both alternated looking at each other's faces, and then back at the television screen’s live broadcast of a burning CVS on the corner of North and Pennsylvania Avenues, 6 blocks south of our longtime family home.

The nausea that began in the pit of my stomach that day has not gone away yet, even a year later. Maybe it subsides, but total disappearance? Not yet.

April 25, 2015.
It is traumatizing to turn on the television to cable news and see your neighborhood falling a part before your eyes. To see the streets you grew up on filled with police barricades, the local pharmacy in smoke, burnt out cars, and people running rampant in the streets without purpose. Or was there? To see looters running from stores with arms full of stuff: clothes, shoes, weaves, diapers, household supplies. It is surreal and traumatizing.

But worse is the commentary from reporters on the ground, mostly white and with no connection to my city and my neighborhood. Butchering the names of the streets as if they cannot read. It's Pennsylvania Avenue, not "Penns-y." If you need to shorten it there are legible signs that say Penn-North. Read. You don't get the pleasure of creating nicknames, because you don't know my city. Then there is the language they used -- consistently describing the scene as a "war zone" even before National Guard touched down. They finally get somebody on camera who is explaining that this is "reactionary not revolutionary," that it is the result of decades of structural inequity; that this is what you get. Still the reporter keeps asking, but why would they do this to their own neighborhood?

As my sister says, They make a different kinda nigga in Baltimore.

And then there's facebook. Status messages in solidarity from people who know nothing about my city. Who understand this on an intellectual level, and maybe even on a visceral level because we do know these stories. No matter where we are in this country. It is plain why this is happening, if you bother to open your eyes. And as much as I appreciate the solidarity, and their good sense talking, it feels like no. No. I don't need or want your commentary because this is personal. Intimate. This is for Baltimore to take care of.

The conversations I want to have are with my fellow Baltimoreans. I think about how when I watched The Wire, I realized that I don't know poor, working class white people. I know Black people at all economic levels and middle class to wealthy white folks. But my city is segregated. I want to talk with the well-meaning white folks in my life who don't understand the power and privilege attached to their whiteness even though they may come from a poor working class background.

Then there are the status messages from some of my own people about how "embarrassed" they are by this mess. Particularly how these "thugs" are acting, when we all know thug is just another word for nigger. Embarrassed. What we should be embarrassed by is a Mayor who can't seem to articulate any understanding of structural racism or her part in this chaos, as her every word and move is broadcast to the nation. Instead she just perpetuates the problem in her language and actions. Condoning what the thugs are doing with inaction. Letting them burn it to the ground. It works perfectly for the plot of gentrification. I'm sure my own parents are motivated now more than ever to leave a neighborhood our family has lived in for more than sixty years. Sixty years on the same block. God, what would Henrietta say? What would Henrietta do?

"Daddy, what happened after the riots of '68? Did you go out? Did Grandma and Granddad lead any organizing efforts?"


April 25, 2016.
Primary elections for mayor are tomorrow. Mayor Rawlings-Blake is out of the running, and Sheila Dixon has the nerve to be campaigning again with these commercials on tv. *eyes roll* I asked Daddy if there were black mayors before Kurt Schmoke?

“There was Clarence Du Burns… [laughter] So your grandmother had a community meeting [at her house] and he came and spoke. I believe he was the Mayor then, I'm not positive. And when it was over, his people were trying to usher him out the door, and he turned around, ‘Where the cake?’ That was your grandmother's pound cake."

Question: Who was Clarence Du Burns? Answer: The first Black mayor of Baltimore. From @slimbobwe: "So your grandmother had a community meeting [at her house] and he came and spoke. I believe he was the Mayor then, I'm not positive. And when it was over, his people were trying to usher him out the door, and he turned around, "Where the cake?" That was your grandmother's pound cake." | We are thinking about tracing memory, family legacy, and the power that ooey-gooey goodness called CAKE has to bring communities of all sorts together. | This is just one of the dance works we'll be sharing this SAT 4/30, NOON @ Upton Triangle Park between Pennsylvania + Fremont Avenues. FREE + OPEN TO THE PUBLIC. | #slmdancesinbaltimore #dance #baltimore #slmdances #noboundariescoalition #myblockmyhood #cake #slmdcake
A video posted by SLMDances (@slmdances) on Apr 25, 2016 at 10:39pm PDT

April 20, 2015
I often joke - though I’m dead serious - that I am a Community Service Professional; I have made a career of volunteerism. I am passionate about the work that I do. I feel that I am called to do it. And what work is that? Making space, uplifting, centering, and loving on women, Black women, Black people. It is both my political and spiritual charge and I enact it through works of movement-based art.

It is also all-consuming, ongoing and exhausting.

Don't get me wrong. Sometimes extra is necessary, but extra is not really in my self-care plan. I’m at capacity today, so I’ll just say her name: Rekia Boyd.

April 25, 2015.
I do love my city. You can be sure of that. I don't visit often, but not for lack of want. I live a non-stop work life. Space for travel anywhere is few and far between. The reason I Ieft was to pursue a career in dance. The same opportunities to do such a thing just don't exist in Baltimore as they do in New York City.

But I live in Harlem for a reason. Not because it's different, but because it is so much the same. I love my ‘hood. I'm attached to its history. That American history. My family history.


February 8, 2016.
Honestly, it’s been a minute since I’ve had a major gush-fest over my favorite pop star, but damn, Beyonce’ has done it again. This time she’s created a black woman artist-organizer’s anthem. I’m living in formation. I’m living for Formation.

April 24, 2016.
If you think Lemonade is just about a woman scorned you missed the point. If you only listened to the music to form your analysis of this project and didn’t watch the film first, you missed the point. This work is a love letter to Black women and I am gushing. I am feeling myself.

And then I’m going to Baltimore tomorrow, and bringing my dancers and I just realized that it’s the anniversary of the Uprisings, then I come back to the top of the track –


July 4, 2016.
I once saw a black man sitting on the bench on the subway platform at 125th street between the 4/5 and 6 trains. He was wearing a black hoodie, jeans, and sneakers and his head was zipped up in the hoodie covering most of his face while he was moving around. It was one of those real life moments that could very well be performance art if we invited an intentional audience. I don’t know if he was crazy, or just being silly, but I dubbed his performance Lamentations in the Hood (word to Martha Graham).

Where I'm sitting on this porch with my thoughts, thinking about making some lemonade, hoping somebody made pound cake. I'm thinking about what makes me feel free. What else do I hold in my tool belt to get me to free? How do I hold all I have been given and remix it to open up more for the little cousins running around in this grass so that one day they know their independence too?
Posted by SLMDances at 4:18 PM